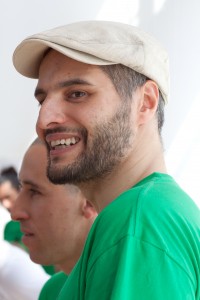 At 6 years old, Stefano Papagni, aka Professor Bambù, he gets close to the martial arts, specifically Judo, and because of that, over 15 years training, learns discipline and self control.
In 2003 comes in contact with capoeira, through Mestre Baixinho, but his passion take off in 2004, thanks to a person of great value: Mestre Shiga (Cordão de Ouro Group Milan), who has the patience and the ability to convey his unconditional love for this art.
In 2008, he starts teaching under the supervision of Mestre Shiga, constantly comparing with other groups both in Italy and Europe.
In 2009, during one of his trips, meets Mestre Poncianinho, and finally finds the capoeira style he was looking for.
Despite the difficulties, starts following M. Poncianinho’s lessons, who accepts Bambu as direct disciple, in 2011.
On November 12, 2011,  he was handed the title of Capoeira Instructor, directly from M. Poncianinho.
On October  2015, during the event to celebrate 15 years of teaching in London, Mestre Poncianinho awarded him the title of Professor.
back
This website uses cookies to improve your experience. We'll assume you're ok with this, but you can opt-out if you wish.Accept Read More
Privacy & Cookies Policy