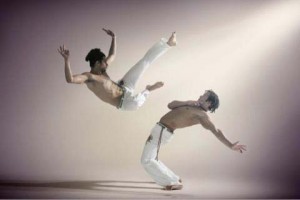 Mestre Ponciano Almeida was born on 31st March 1980 and raised in Guaratinguetá, a small town in the state of São Paolo, Brazil.

He started Capoeira at the age of four in our first Capoeira Academy which was called JACARE ACADEMIA in Guaratingueta, when the name of our group was CONCEICAO DA PRAIA named by Mestre Ponciano, Mestre Poncianinho’s uncle.

“Someone asked: Which is your favourite game that you played? My answer: The next!”

Mestre Poncianinho began his Capoeira training with M. Ponciano and M. Jose Antonio as he was fortunate enough to have both his father and his uncle as his Mestre, both students of Grande Mestre Suassuna.

Mestre Jose Antonio is the Mestre of Barracão da Capoeira Guaratingueta where M. Poncianinho started teaching Capoeira at the age of fifteen.

Poncianinho has since been doing capoeira shows and teaching full time in Brazil and throughout Europe, and he has been teaching in London since 2000.

M. Poncianinho has appeared in music videos, magazines, newspapers and TV commercials, including the trailer for BBC One and in Harry Potter’s film.
M. Poncianinho became a master of capoeira in 2004.