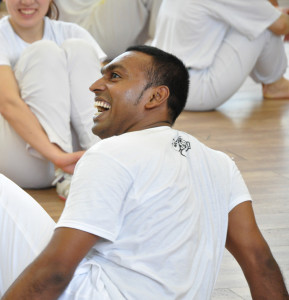 Dehiwalage Fernando Nirajan Trevin, aka Instrutor Sorriso, was born on September 5th 1979, in Negombo, Sri Lanka. Since he was young he had a passion for music and dance. That led him to give several classes for children. In 2002, together with Sri Lanka Folk Dance Company, he brought his country’s culture and rhythms in Italy, performing in different events.
In 2004 Instrutor Bambu convinced him to try some capoeira lessons, and soon he got passionate about this all the aspects of this art. Thus he enters the group of Mestre Shiga (Cordao de Ouro Milan), who transmited the love for capoeira, and trained to monitor in 2010.
In 2011, he decided to follow Instr. Bambu, his mentor, and to pass under the supervision of M. Poncianinho. In April 2012, during the official event of the group, Mestre Poncianinho confirmed him as monitor.
Under the training of M. Poncianinho and Instr. Bambu, he was handed the title of Capoeira Instructor in 2013, directly from Mestre.
In 2014 he decided to go back to Sri Lanka, where he founded the group Mojuba Negombo, under the supervision of M. Poncianinho.
indietro
This website uses cookies to improve your experience. We'll assume you're ok with this, but you can opt-out if you wish.Accept Read More
Privacy & Cookies Policy